I don’t normally have much positive stuff to post about on here but I the last few days have been pretty good. I went swimming with my dad on Saturday, we used to go every week when I was younger but I hadn’t been for ages. I’m going to try and start going regularly again.

Last night I met up with someone I met online a few years ago, we hadn’t seen each other for a long time and I was afraid that after how quiet and boring I was last time that she wouldn’t want to see me again but it was really nice to catch up. Her friend was with her who I hadn’t met before and I was quite anxious about it but I think everything went alright and I enjoyed it. I feel like kind of a fraud on the rare occasions when I sort of manage to bluff my way through these kind of things, like I am almost lying by trying to hide what a loser I really am. Anyway, I’ve been trying my best to silence these doubts and stop myself from analysing everything that I said or did wrong and am doing better than usual.

Stayed at uni last night and didn’t really accomplish much (including eating 😦 ) but I went out this afternoon to meet a friend from a social anxiety forum who lives a few miles away. We’d only met once before but we went to see a film and had a fairly long chat in Starbucks afterwards. It was really nice to see her again and I think we got on quite well. I managed to talk quite a lot by my standards and I don’t think she was too bored.

Back home now in preparation for my CBT on Monday, but I’m annoyed because I forgot both my phone and my meds 😦 I found one 150mg tablet here but that’s going to have to last me 2 days.

Things have certainly improved since this time last week when I was probably at my lowest point for 6 months. I’m going to try and stay positive and keep working at CBT and aim to spend a bit more time with my flatmates (though I have a creeping feeling that I am starting to annoy them when I am around more, like they can’t really enjoy themselves if I’m in the room).

In an effort to motivate myself to get out of my room a bit more (and also to stop this site becoming just a mood diary…) I’ve decided to take a cue from Penny and try to take a photo a day. I used to enjoy photography, though I’ve never been to any classes or learned anything about it. There isn’t much around the place where I live at home to take photos of, but I haven’t explored my university town much yet so maybe I’ll find some cool things to take pictures of here. I took my first one today in Nottingham; a statue of Brian Clough, who managed my favourite team Nottingham Forest to two consecutive European cups. I only had my phone with me at the time, I’ll try and use my camera for the others. 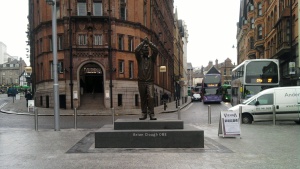 I wanted to write about this earlier but with the annoying web hosting problems, haven’t been able to…

My university was closed on Thursday because of the snow. I found out before I got ready to go to my early class fortunately, but instead of spending all day in my room and just sneaking out to get something to eat as I usually would have done, I decided to go and get a drink from the kitchen and sat with my flatmates and the people from the opposite apartment. I actually managed to say a few words here and there which I was quite pleased about. Later on I went shopping with one of my future housemates, J, and we had lunch with E, the other girl we’ll be living with. It was nice to spend a bit of time with them and we actually had a decent conversation, I talked to E about films for quite a while before I went back to do some work.

Last week we’d planned to go for dinner at the pub on campus to celebrate getting our house for next year and this time we actually did go, unlike when they suggested going out for my birthday. It was just us 3 at first and then some of the girls from the other apartment came to join us for a few drinks afterwards and I actually had a nice evening and managed to act reasonably normal for once. I don’t think they thought I was too strange and I wasn’t completely silent the whole time which is about as good as it gets for me.

I’m not sure what happened to me, to be honset. It seems rather strange that I can go from being extremely depressed and constantly thinking of suicide to probably as sociable and happy as I’ve been for about a year or more within 24 hours. I’m aware that I could and probably will crash back down again soon, but it was nice to have a day where I wasn’t feeling awful for a change. I really, really have trouble believing that people don’t think that I’m a complete weirdo, but I didn’t feel that bad on Thursday. I almost fit in. I can’t help but feel something was up though, looking back on it. The day before I sent a message to E on Facebook, asking if they were really sure about living with me next year. I was feeling bad about how boring it must be having me as a flatmate. She was really nice about it though and reassured me that they wanted me to stay with them. I explained a bit about how I feel nervous around everyone but didn’t go into too much detail, but now I’m thinking that maybe she asked the others to be especially nice to me or something. Oh well, I suppose I should be happy but already the nagging doubts are coming.

I’m home for the weekend again, I’m not sure if constantly coming home is helping or hurting me. In a way, I couldn’t have done without it in previous weeks because I wasn’t eating when I was at uni and I probably would have gone insane spending that long alone. I feel like it might be better for me to try and spend more time around them though. It’s incredibly difficult and mentally draining for me to be around people and I’m not sure how long I could manage it for though.

Apologies if this post doesn’t make much sense, I didn’t sleep well at all for the past couple of days. I’m trying to ensure that I don’t get addicted to zopiclone so going without it for a while.

My mental health practitioner is always on at me to go out more, even if it’s just for a walk but a lot of the time I find it difficult to motivate myself to get out of bed. I often do feel better if I can drag myself outside for a while, though it’s not much fun to go everywhere by yourself, which I usually end up doing since I have no friends.

I got a rare opportunity to spend the day with my sister today, she’s usually very busy with work or at her boyfriend’s house, I miss her a lot – we used to spend a lot of time together and unlike a lot of siblings, we get on really well. We went to the seaside on the train, I haven’t been to a beach since 2004 so was happy to be by the sea again. It was a lovely day but I couldn’t help feeling very guilty about what my thoughts and plans must have done to her. I get the feeling she’s worried about me, I wish she’d never found out that I was suicidal, I didn’t think it was fair to let her know but I didn’t have a choice in the matter. Anyway, I was feeling extra guilty and rather sad that it might be the last time we get to spend a day together doing something fun 😦 I still don’t know what I’m going to do in the next few weeks, I’d say it’s not likely that I’ll be here by the time my uni course starts.

I don’t really know what else to write, I’m feeling kind of empty inside at the moment.